The History of Cordings | The Legendary British Heritage Brand 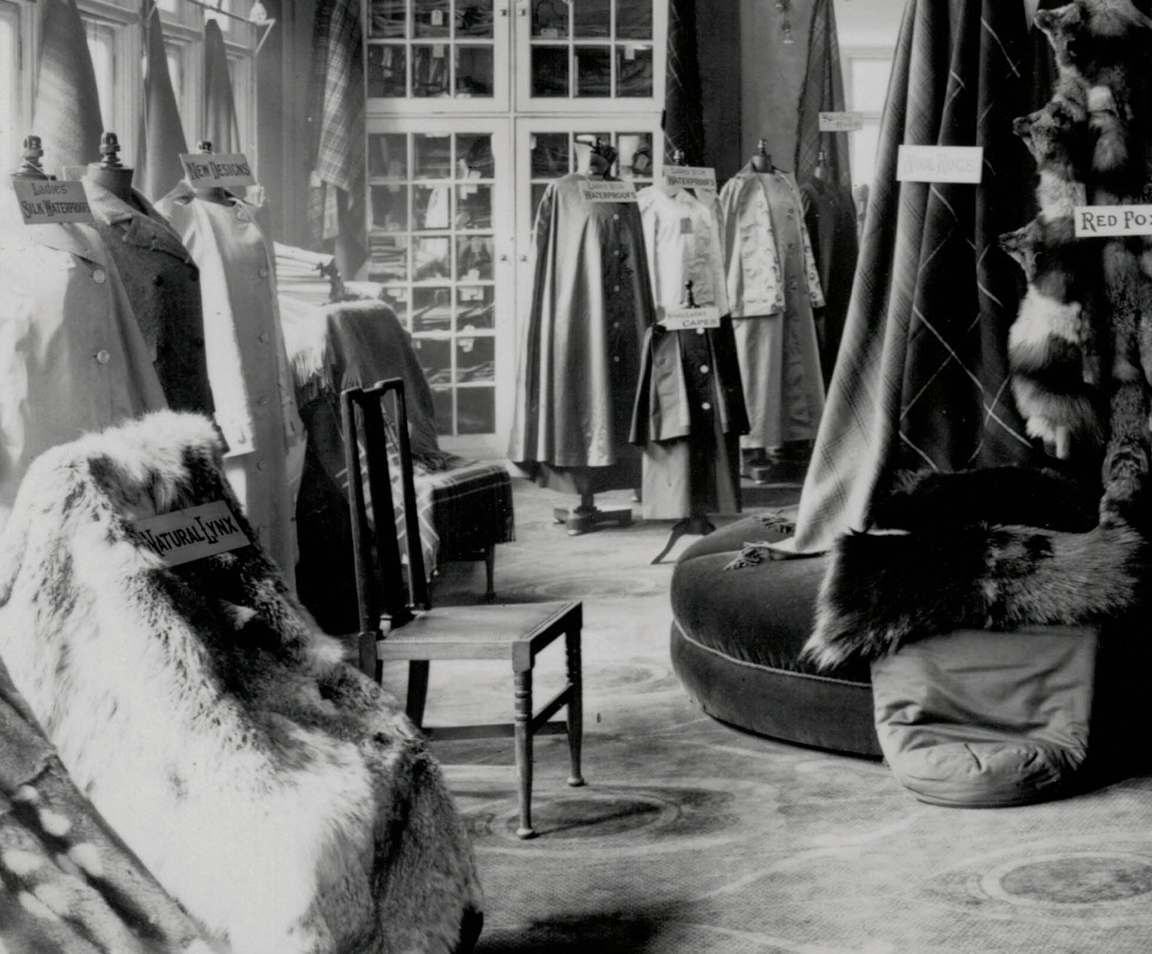 Since 1839, Cordings have been part of the sartorial landscape of Britain, from our origins as a waterproofer to an iconic British clothing brand. Explore our history here. 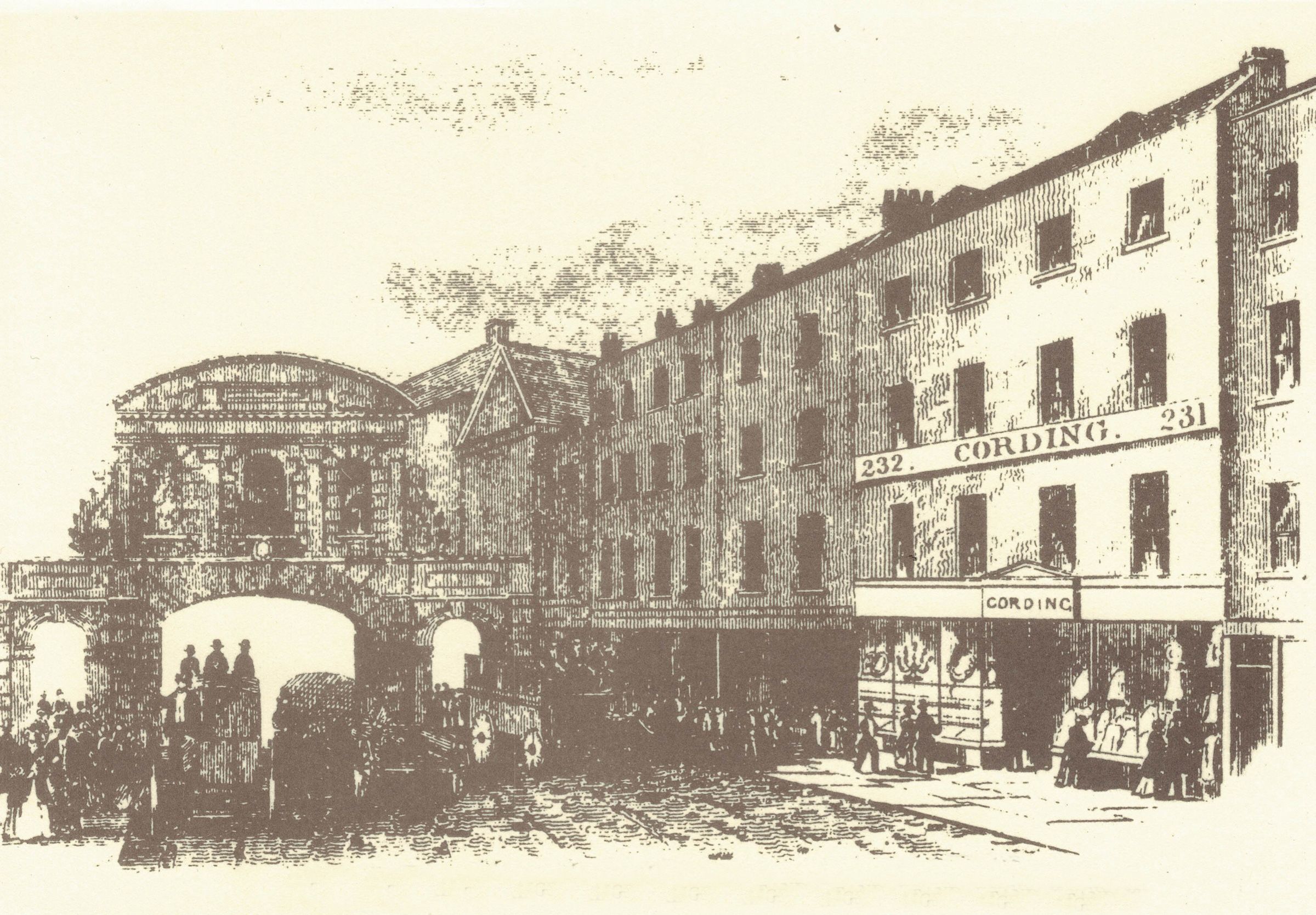 Cordings in The Strand in 1839 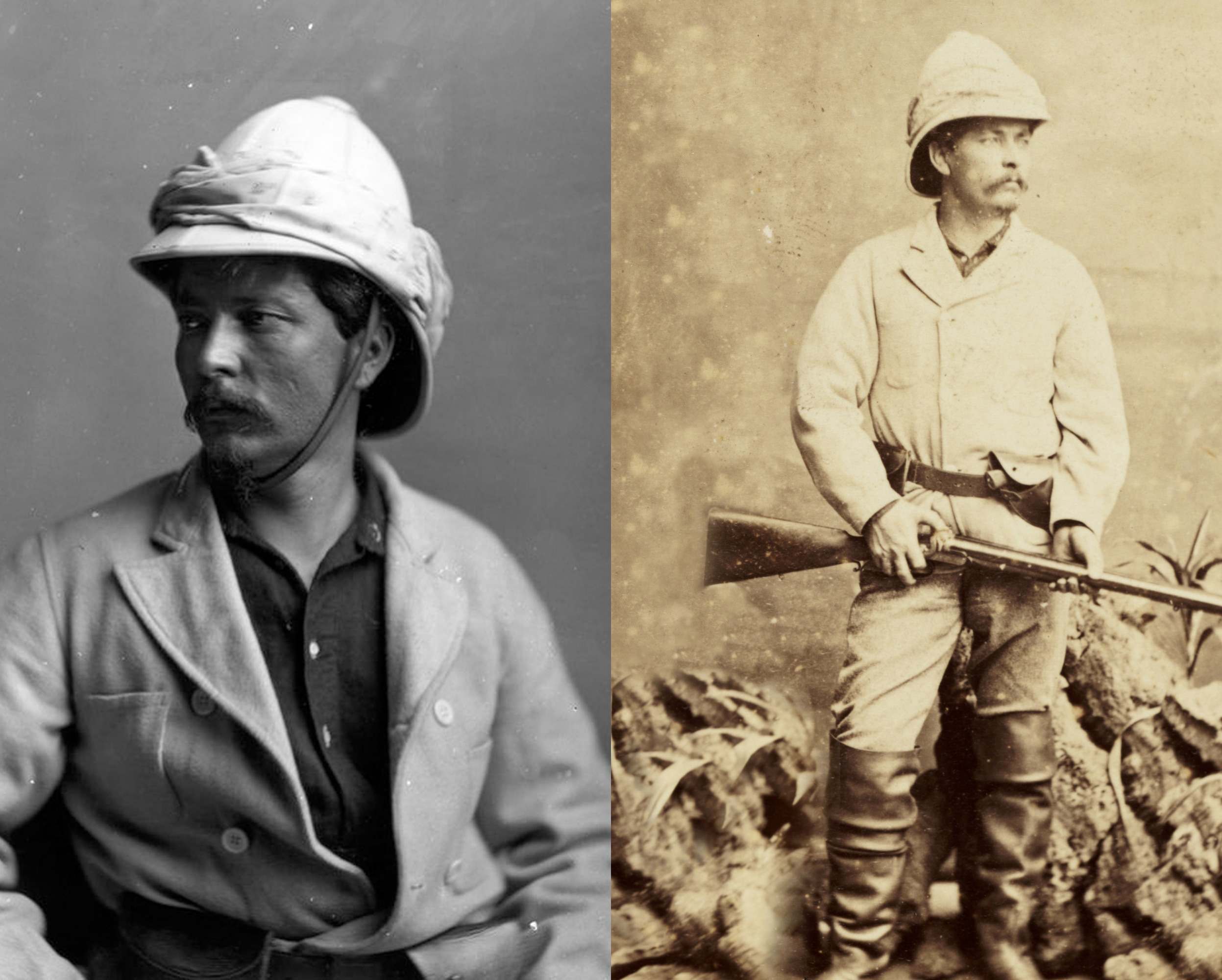 Waterproofing was the raison d’etre of the original Cordings business, and John Charles Cording opened his first shop as an outfitter and waterproofer in 1839 at 231 The Strand. Charles Mackintosh patented his process of dissolving rubber and binding it to cotton in the 1800s. By 1843, he had perfected the vulcanisation process, and John Cording started to manufacture the waterproof coats generically known as 'Mackintosh' still sold today.

John Charles recognised his coats were useful both for riding and daily life, but also for the burgeoning motor era. These coats were considered as essential in the hunting field as they were by early motorists in their open top cars – whose hoods were made from the same material – and are still one of the bedrocks of the Cordings range.

Queen Victoria had been on the throne for three years before she paid her first official visit to the City of London in 1839 – and the grand procession passed right outside John Charles Cordings first shop in The Strand. This was also the year that saw the invention of modern photography by William Fox Talbot, and a young author named Charles Dickens publishing his novel Nicholas Nickleby.

It wasn’t long before the Cordings name was synonymous with outdoor living and the store was the first port of call for the explorer Sir Henry Morton Stanley when he wanted to put a properly-shod foot forward on his path to find Dr Livingstone in 1871.

In 1877, the business transferred to 19 Piccadilly, and in 1902 was incorporated into a Limited Company - J.C. Cording & Co Limited. Additional premises were acquired at 24 Jermyn Street and 35 St James’ Street, still called Cording House today. Between 1877 and 1899, all tailoring and bootmaking at Cordings took place in the huge basement of 19 Piccadilly, which extended through to Regent Street, and additional premises were acquired in Jermyn Street and St James’ Street.

In the early 1900s, Westminster Council announced a plan to widen Piccadilly, which entailed destroying the frontage facing Piccadilly and rebuilding the original façade ten yards further back in the position it still occupies. Cordings resisted in vain, and eventually received a compensation claim of more than £30,000. During the period of disruption, the business was carried out from 35 St James’ Street. The company expanded by acquiring both Grant and Cockburn Ltd and Stoney’s of Charing Cross Road. Negotiations were concluded with Denman & Company to take over the first floor at number 20 Piccadilly. 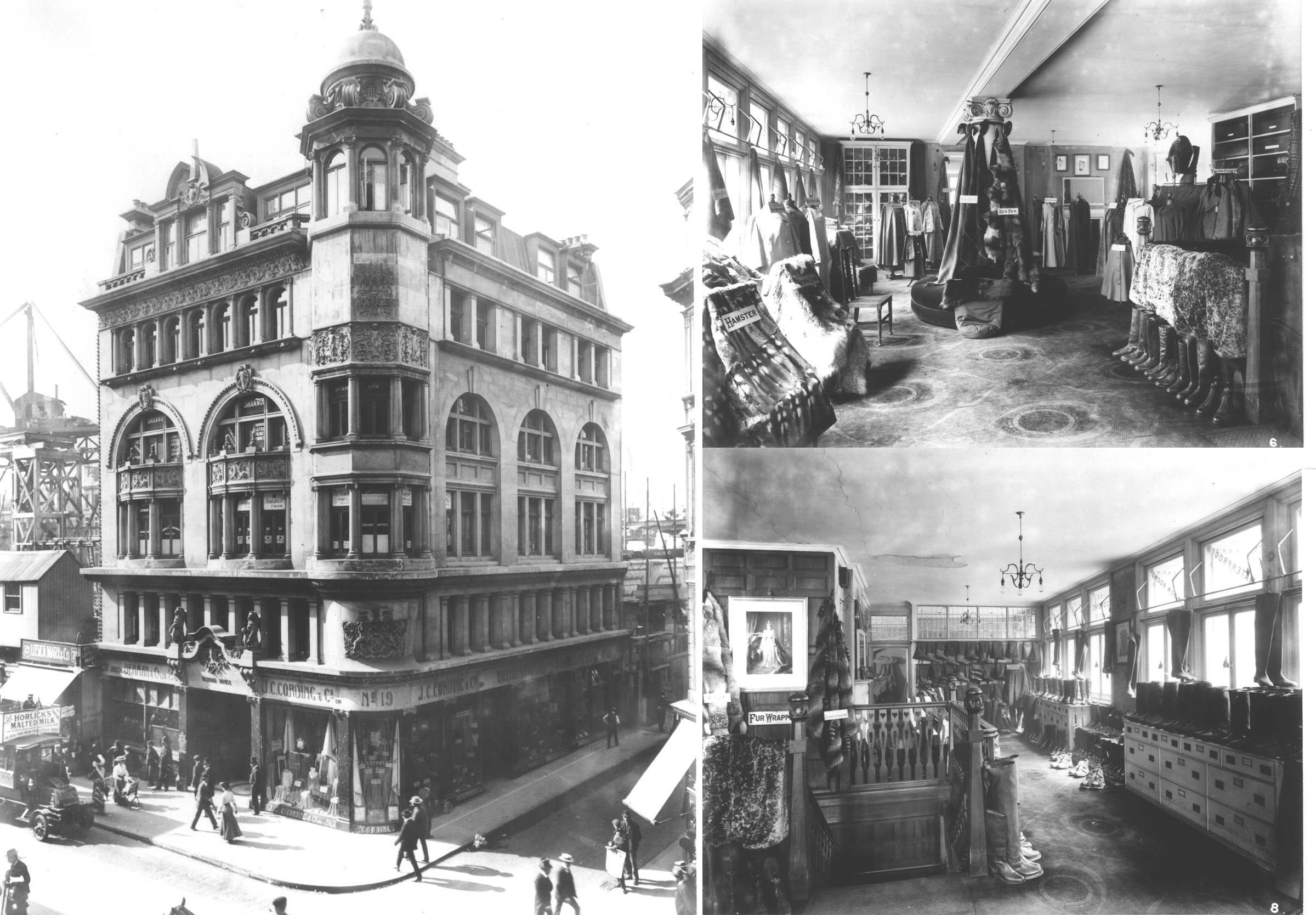 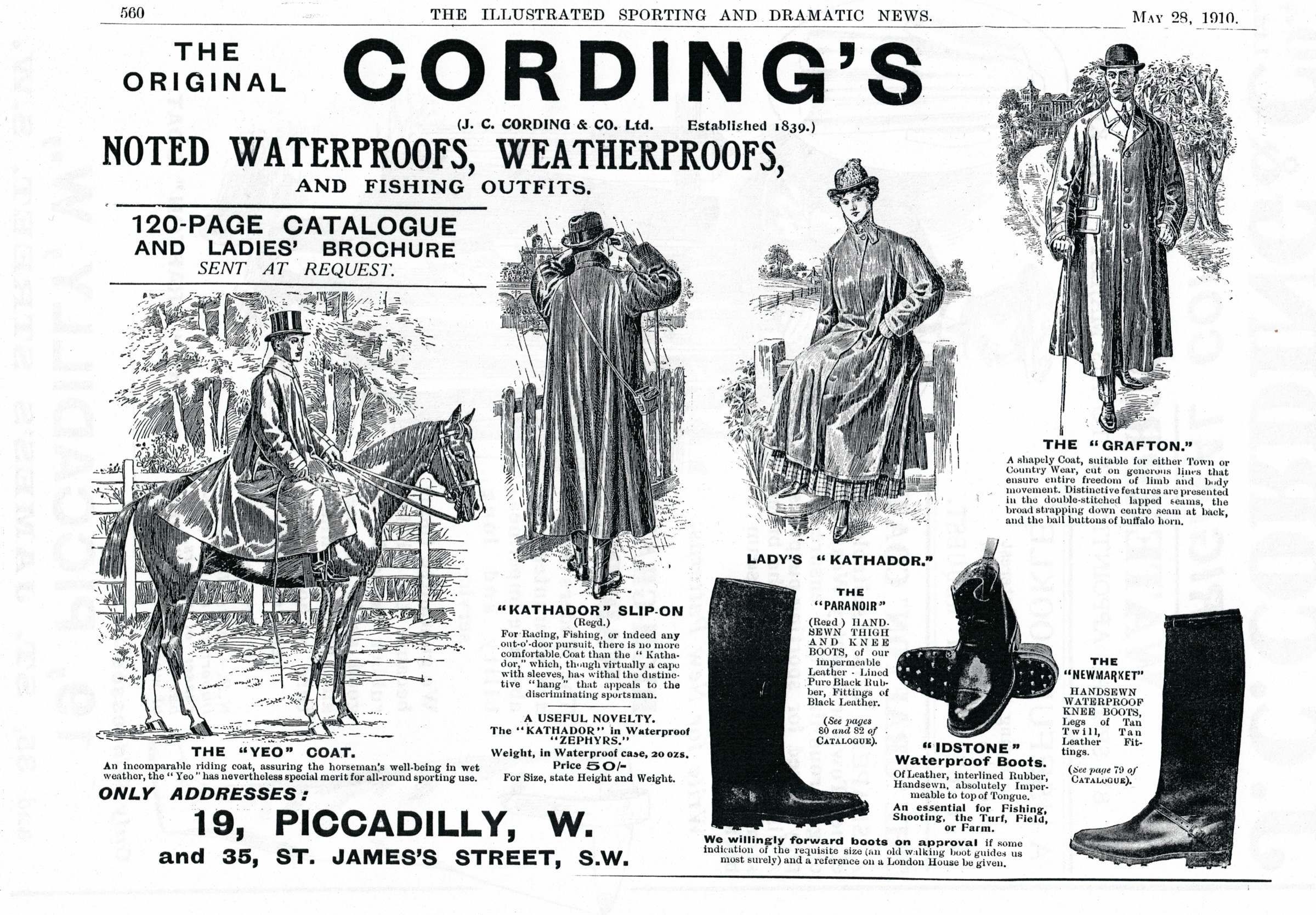 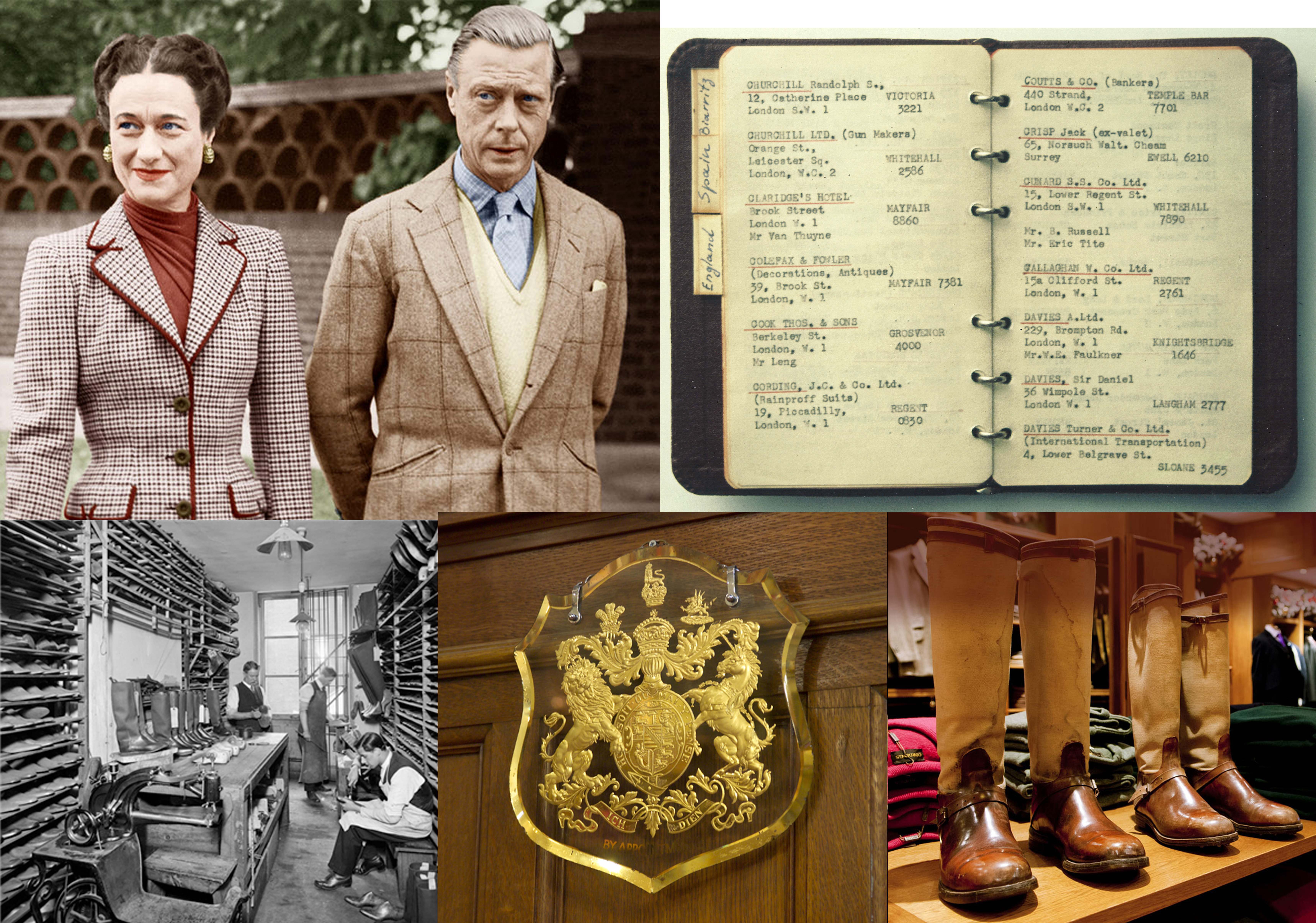 In 1909, JC Cording & Company was granted the Prince of Wales warrant as waterproofers to the future King George V. In 1922, the young Prince of Wales adopted Cordings as one of his outfitters, as had his father before him. It was at this time that the famous Newmarket and Idstone boots were patented, and Cordings made Newmarket boots for Elizabeth, the mother of the current monarch, the Duke of Windsor, and Mrs Simpson.

To show off its remarkable waterproof properties, a canvas and leather Newmarket boot remained submerged in a glass tank full of water in the shop window at Cordings for so many years that it became part of the London taxi drivers’ ‘knowledge’. Cordings no longer makes them, but examples of the boots showing the immaculate craftsmanship you would expect from Cordings can still be seen around the store today. The old workshop area in the basement with its parquet floor is still there, along with carefully written ledgers with details of boot orders.

Cordings was quickly becoming synonymous with outdoor living and was an important shop for all city gentlemen to call at before venturing into the countryside.

In the 1920s, planning permission was granted to replace Nash’s Regent Street designs with a new office development. Cordings lost its Regent Street side and its Air Street workshops. The depression of the late twenties and thirties was a tough time for everyone including Cordings and the St James’ shop was closed, but Cordings was determined to buck the trend and the Piccadilly store evolved the collection from predominately outerwear and boots to a comprehensive range of country wear.

It was at this time that the five core items which, to this day, epitomise the Cordings ethos, were established: the covert coat, Mackintosh, tweed jackets, corduroy and moleskin trousers, and tattersall shirts. The business resumed some of its stability but, as the war years approached, the manufacturing capacity was lost and in the fifties and sixties the company’s image had become unfashionably antiquated in an era unwilling to accept tradition and quality on their own terms.

Cordings refused to compromise its traditions and standards and, while companies around it were outsourcing abroad, Cordings remained resolutely British, continuing to work with British mills and workshops to create its exclusive collections

In 1971, the business passed out of the hands of the original family and was acquired by the owners of University Motors, the celebrated MG sports car dealers of Berkeley Square. Sadly, the day of the open-topped two-seater was on the wane, and Cordings was neglected as University Motors’ business declined and relocated outside London.

In 1986, Jeremy Hackett and Ashley Lloyd Jennings were invited to sell their fledgling country brand Hackett in the store, and in 1991, the premises were expanded to fill both 19 and 20 Piccadilly as originally occupied at the start of the century. Cordings and Hackett worked together on clothing the young English gent, but remained separate businesses. Unfortunately swift expansion overstretched Hackett who had to be rescued and refinanced in 1992 by Dunhill. Hackett was then set up in a new flagship store in Sloane Street, leaving Cordings again as a stand-alone brand in Piccadilly.

On the 28th May 1998, the Princess Royal made an official visit to the shop in her capacity as President of the British Clothing Export Council. 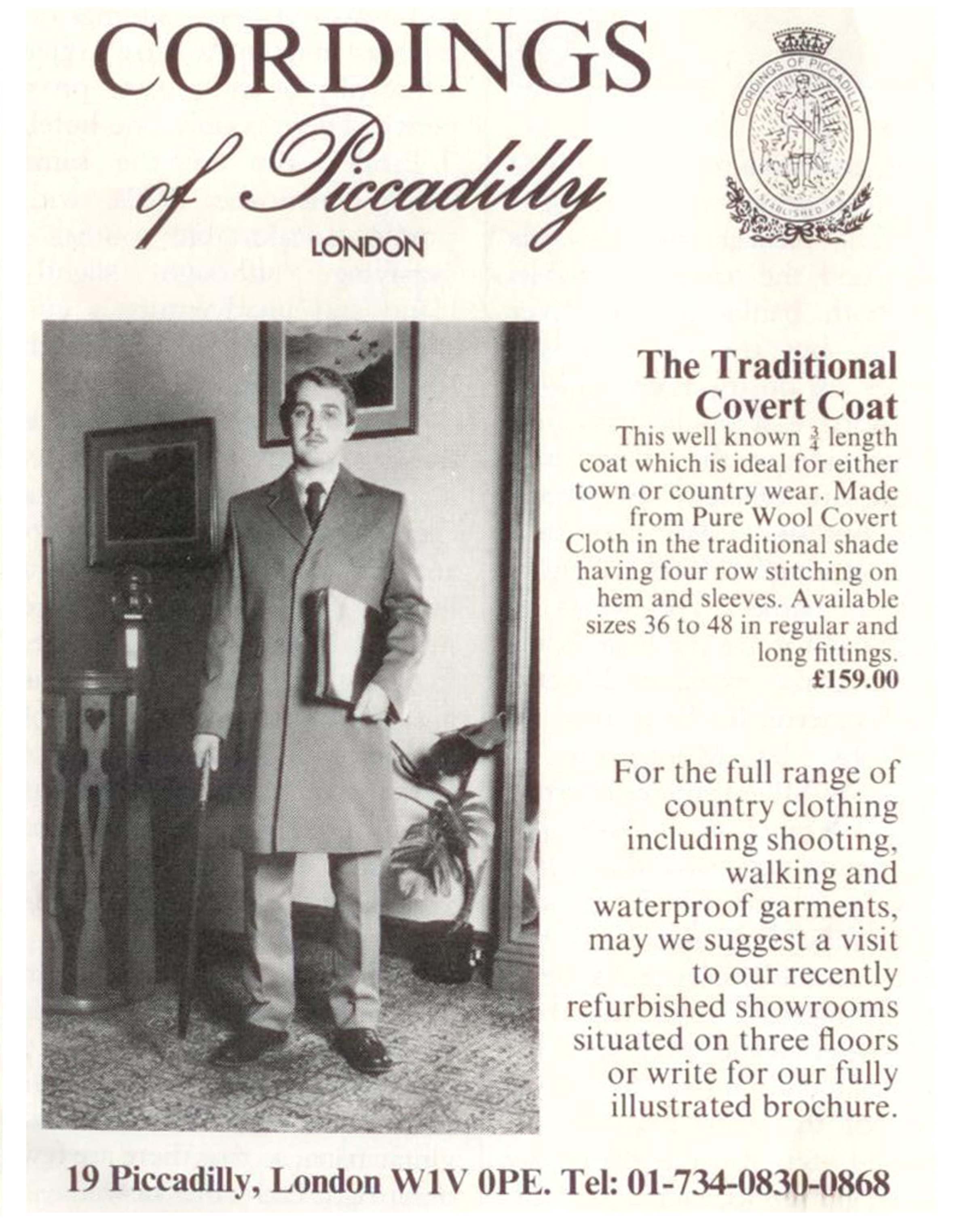 In 2003, the current management team approached Cordings’ best customer and asked if he would assist in a management buyout. The customer was Eric Clapton.

“I first became aware of Cordings in my mid-teens,” Eric explains. “I come from the country and it was the highlight of our week to come up to London and listen to the musicians. It was difficult to get home late, so I would spend that time till dawn just walking the West End. I remembered Cordings. It stuck in my mind as a place of tradition; the heritage of England.”

Eric has helped mastermind Cordings’ re establishment as the home of country clothing, including the introduction of a women’s range in 2003. “I knew that my wife had found it difficult to find clothes which were genuinely practical yet stylish at the same time. The lines are very flattering and feminine and the fabrics are lighter, but they retain the thread of the Cordings core products.” When scheduling allows, Eric is very involved in choosing the tweeds for the new seasons, and his input in the design process is invaluable. 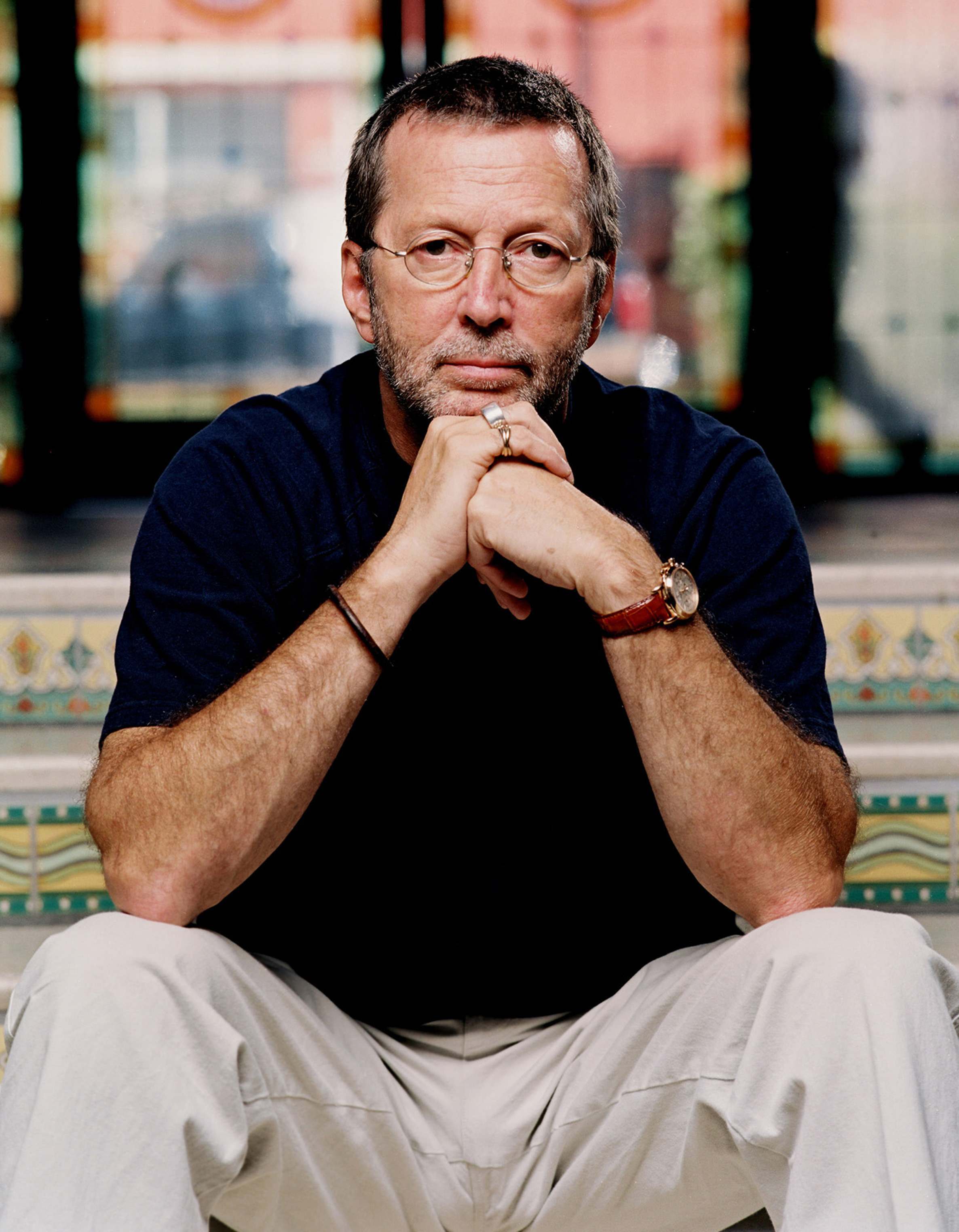 This ability to combine practicality and style has made Cordings the go-to place for gentlemen and ladies who are firmly established in the country while still wanting to cut a dash in town; and the pieces in its country clothing lines are now as much loved internationally as they are in Britain.

With its elegant store and a comprehensive website where distinguished country folk can shop online to buy their perfect clothes for work and pleasure, Cordings is firmly established as a foremost supplier of country clothing, and is sure to remain part of the fabric of the great British countryside for future generations. 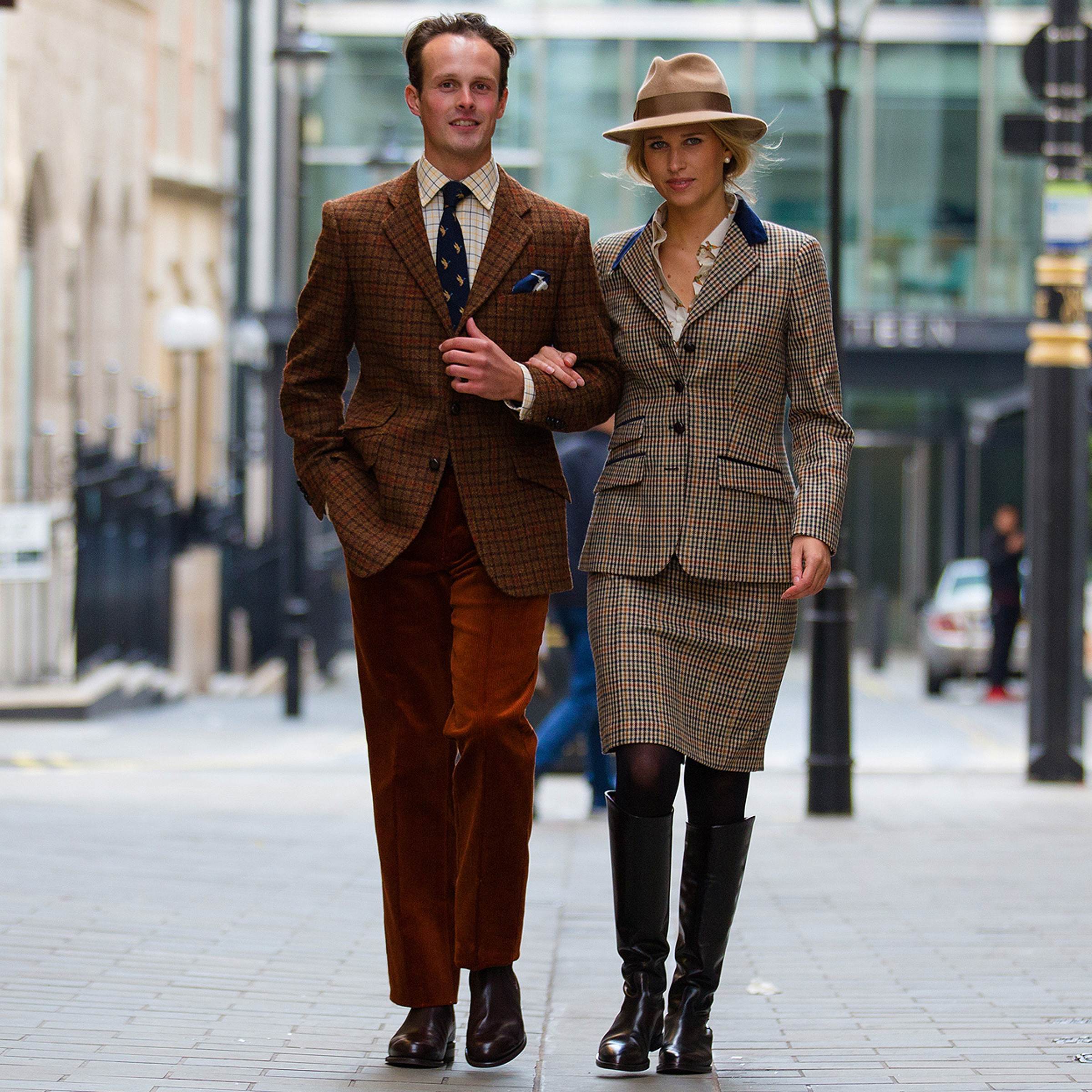